October 19, 2019
Say you have a bunch of Windows servers hosted in AWS. The VPC they are in does not have VPN or Direct Connect connect back to your on premse network. Expose RDP port through public IP for these Windows servers is a very good way to get hacked. So how can we securely connect to the servers in this kind setup?

Fortunately we have SSM for the rescue. In August, AWS announced a new feature for SSM Session Manager, which allows us to securely create tunnels between your EC2 instances deployed in private subnets and your local machine. You can read about the announcement here.

Here are the steps you can setup for Windows Instances.
1. Configure the Windows EC2 as Managed Instances in SSM.
This mainly involves assign a IAM EC2 Role to the instance with SSM policies. Since the focus of this post is about Session Manager Port Forwarding, I won't expand this too much. you can find more details about initial setup of SSM here.

2. For your existing Windows EC2s, you will need to update the SSM Agent on them to the latest version so it has the new feature. You can easily carry out SSM agent update via SSM State Manager.

3. In addition to AWS CLI or AWS PowerShell Toolkit, you will need to install Session Manager Plugin on your local machine. The plugin can be downloaded from here.

4. Type the command below to initiate the Port Fowarding session. Make sure you have the correct region setup.
The line above is pretty self-explanatory. You need to provide the Instance ID and the "Document" name, which is AWS term for SSM runbook. And also which port you want the fowarding.

6. That's it! You should now be able to RDP into the Windows EC2 instance WITHOUT:
PS. Session Manager does allow Remote PowerShell access without any extra setup. However, the shell session is authenticated with a generic ssm-user account, which is not ideal for security audit.

Within Windows command prompt, AWS CLI does not provide autocomplete feature. According to AWS document, the feature is only available on “Unix-like systems”.Luckily we have WSL (Windows Subsystem for Linux)on Windows 10. We can simply run AWS CLI from the WSL with autocomplete provided natively. Problem solved!Here are the steps I took to get AWS CLI installed on my WSL Ubuntu.Before we install AWS CLI package itself, we need to get Python package manager pip installed first.Download pip install script. Notice I use –k here, this is because I am running this behind company proxy, the proxy changes HTTPS certificate to its own certificate. Without –k the command will fail. You can leave it out if you have direct Internet access$curl-O-khttps://bootstrap.pypa.io/get-pip.py Next, the usual update apt command$sudoapt-gtupdate Then we download and install Python minimal$sudoaptinstallpython-minimal Now we can install pip, the --trusted-host here is again due to the fact that I am downloading…
Read more

Ran into an interesting issue with one of our Exchange Online customer. Thought it probably worth sharing with the solution I found. 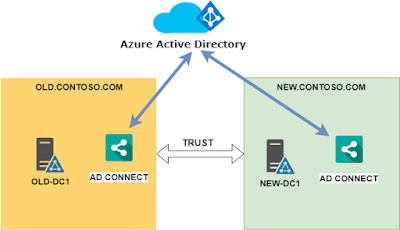