Office 365 has high SLAs (the latest English version) backed by Microsoft’s excellent Azure Cloud. However, like every other cloud services, there is always the chance for something unexpected to happen.

This year April Office 365 had a major hiccup to its service. Its Asia Pacific backend Azure AD authentication went haywire. As a result, users lost access all O365 services. To make it worse, the usual Office 365 monitoring channel: Office 365 dashboard was not accessible due to this fault.

After the incident, it become obvious that the Twitter account is a pretty reliable source for monitoring Office 365 service status. Based on this, I developed a solution, it uses PowerShell script to check for new tweets from @Office365Status Twitter account. The scheduled script is executed from a AWS EC2 instance, this completely eliminates the dependence from Microsoft services.

Ok, let’s go through the script in details.

In order to allow our script to read tweets, we first need to create an app in https://apps.twitter.com. Please be aware the site will be consolidated into https://developer.twitter.com soon. And as of July 2018, you will need to apply for a Twitter developer account in order to create a new app.

After created the app, under Permissions, set the permission as Read only, AS the monitoring script will have no need to write. 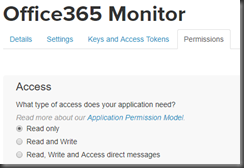 Now we just need a PowerShell module that uses Twitter API to pull out tweets. Among all the PowerShell modules I tested, MyTwitter, written by Adam Bertram is the only one works for me. You can find the module from here.

First, we create a authenticated session with the generated app tokens.

Next, we use Get-TweetTimeline to get recent tweets from @Office365Status account. Then we grab the first item from the array, which is the latest tweet from the account.

The script will then get the creation time of the latest tweet. Twitter uses a non standard time format. So first, we will need to convert the time to a conventional format. This will allow us to compare the creation time with the current time on the server.

To convert the time we use a Convert-DateString function.

dd = day of the month

The function uses .Net method TryParseExact to convert the time format to something like below.

Once we have the correct creation time, my script will check if the tweet is a reply. This is to filter out those reply tweets. As we only care about the incident updates.

Upon confirm the tweet is posted within last hour and is not a reply tweet, the script will then send out an email to a monitoring mailbox (Not your Office 365 mailbox of course!).

The PowerShell monitoring script can be downloaded from my GitHub repo here.

The last part of the solution is to upload the script to a server (EC2 in AWS in my case) and schedule it to run every hour!

Below is an Email I received for a recent incident. Hope you find this useful!

Within Windows command prompt, AWS CLI does not provide autocomplete feature. According to AWS document, the feature is only available on “Unix-like systems”. Luckily we have WSL (Windows Subsystem for Linux)on Windows 10. We can simply run AWS CLI from the WSL with autocomplete provided natively. Problem solved! Here are the steps I took to get AWS CLI installed on my WSL Ubuntu. Before we install AWS CLI package itself, we need to get Python package manager pip installed first. Download pip install script. Notice I use –k here, this is because I am running this behind company proxy, the proxy changes HTTPS certificate to its own certificate. Without –k the command will fail. You can leave it out if you have direct Internet access $ curl -O -k https://bootstrap.pypa.io/get-pip.py Next, the usual update apt command $ sudo apt-gt update Then we download and install Python minimal $ sudo apt install python-minimal Now we can install pip, the --trusted-host here is again
Read more

Ran into an interesting issue with one of our Exchange Online customer. Thought it probably worth sharing with the solution I found. The customer has an Exchange Hybrid setup. Recently some of  Office 365 Exchange Online users complain they cannot email to a particular on premise mailbox: Paul.Smith@contoso.co m . The user bascialy does not show up in Exchange Online GAL. The on premise mailbox is working fine and other on premise staff can send emails to it without issue. When I checked Exchange Online, I cannot find the contact object for this account. Initially I thought it could be for some reason the user's on premise AD object has not been synced properly to Office 365. So I tried with recreating the object in Office 365 by moving the on premise AD account to a non-synced OU. This delete the user's Office 365 account. Then I move the on premise account back into its original OU. After re-sync the account back into Office 365, it still refuse to show up in Exchange O
Read more

Recently I was working on Exchange Hybrid Deployment for one of our customer. The Hybrid Configuration process itself went smoothly. No errors for HCW.  The problems came when I tried to move mailbox to Exchange Online. The migration fails with error: Target mailbox doesn't have an SMTP proxy matching '<domain>.mail.onmicrosoft.com'" To check that I ran the following command against the On-premise Exchange. Get-Mailbox "O365 Test5" | fl and check the EmailAddress filed Then I ran get-mailuser in Exchange Online. Because the mailbox hasn't been migrated, the user still show up as Mailuser(Contact) in Office 365. Get-MailUser "o365 test6" |fl Noticed  the proxy address "contoso.mail.onmicrosoft.com" does not show up into the Azure AD object.  The user object in Office 365  only has our primary SMTP address "username@contoso.com" and "username@contoso.onmicrosoft.com" stamped. "CONT
Read more